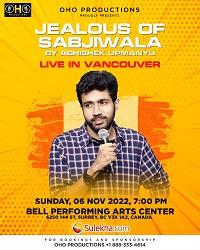 Please be advised: Public Health Orders regarding proof of vaccination and masking may change between the time you purchase your ticket and the date of the event. Any Public Health Orders in place on the day of the event will need to be adhered to. There are no refunds or exchanges on tickets. (If the performance is rescheduled due to a Provincial Health order, tickets will be valid for the rescheduled date or refunded at the discretion of the promoter.)

All patrons over the age of 1 year old must have a ticket in order to enter the auditorium.

× If you are looking to purchase wheelchair accessible seating or have mobility difficulties, please call the Bell Performing Arts Centre Box office at 604-507-6355

Abhishek Upmanyu is a stand-up comedian, writer and haiku enthusiast. He looks and sounds like a regular Delhi boy, except is harmless. He does kill though, mostly on stage, and has done so at some of the biggest stages on the stand-up circuit. Upmanyu covers seemingly everyday topics with insightful and hilarious effects.

Abhishek is among the most viral and renowned comedians on the planet. His show “Thoda Saaf Bol” boasts selling out the biggest comedy arenas across the globe. His YouTube channel has 4.11 million subscribers currently, and north of 100 million views.

Jealous of Sabjiwala. Abhishek has been working on this special for some time now, and a lot of time and effort has gone into making this one of the funniest specials you will see.